I have always been a Disney Princess fan. I can’t remember a time when I didn’t squeal at the sight of Cinderella on a product. I love the pink. I love the glitter. I love the sparkles, and diamonds, and tiaras, and true love’s first kiss. I’m a sucker for all of it. I recently spent two amazing days at Disneyland with my best friend during my spring break, where I shamelessly reveled in every bit of the “royalty” that my plastic tiara granted me. However, that said, I am well aware of the many ways that Disney’s depictions of princesses, and female protagonists in general, are hugely problematic from a feminist standpoint.

Our earliest models of the “Disney Princess” were completely helpless without the aid of their princes; Snow White (Snow White and the Seven Dwarfs 1937), Cinderella (Cinderella 1950), and Aurora (Sleeping Beauty 1959) were all pretty much fucked sideways without a man to rescue them. The later generation of so called Disney “Princesses”—really this term refers to any of Disney’s central female protagonists, crown or not—began to show some agency. Ariel (The Little Mermaid 1989), Belle (Beauty and the Beast 1991), Jasmine (Aladdin 1992), and Pocahontas (Pocahontas 1995) all exhibit a streak of independence in breaking traditions and rules to pursue their own choices. However, by this same token they are willing to sacrifice their own social worlds for the sake of The Man. Ariel quite literally gave up half her body in order to become human and marry Prince Eric. As someone who spent four years on swim team for the main purpose of being able to pretend I was a mermaid, I have trouble reconciling giving up your fins for a man, even if he is such a looker as Eric.

And then there’s Mulan (Mulan 1998). Oh, Mulan. Now there’s a tangle if ever I saw one. Mulan is arguably the “Princess” who shows the most agency as she literally takes a man’s place and proves that she can perform as well as or better than any other man. But of course, in order to accomplish this she abandons her own physical sex entirely, effectively becoming a man, therefore nullifying her force as a representation of a strong woman. Mulan shows not that a woman can do what a man can do, but rather that a woman who is “made into a man” might succeed as a man. Mulan is also the most androgynous looking of all the Princesses, and the one who experiences the most difficulty connecting with her femininity. As we see at the beginning of the movie as she struggles to make a good impression with the matchmaker, she is clearly not comfortable with her identity as a proper young Chinese woman. Then there was the real clincher on the Mulan issue, when Disney’s recent TV series “Once Upon A Time”—a  live action medley of all the classic Disney characters living in the same world together—revealed Mulan as a bisexual: she was in love with Aurora (read more here). Don’t get me wrong, LGBTQ representation in a Disney show is certainly not something to be dismissed. But isn’t it a bit of a low blow to choose the Princess who was already gender-confused and cross-dressing as the recipient of this honor?  Not to mention that she is the only eastern-Asian represented in the princess club. Now she is really Other.

As a glitz and glitter princess wannabe and a young Chinese girl, I was very disappointed in my youth to have my Halloween princess options seemingly limited to a woman in armor. I was also convinced that my black hair and slanted eyes effectively barred my ability to dress up as a Western princess. I just wanted a sparkly dress and a fucking tiara! Why did it take me over twenty years to finally go ahead and dress up as Cinderella at Disneyland? 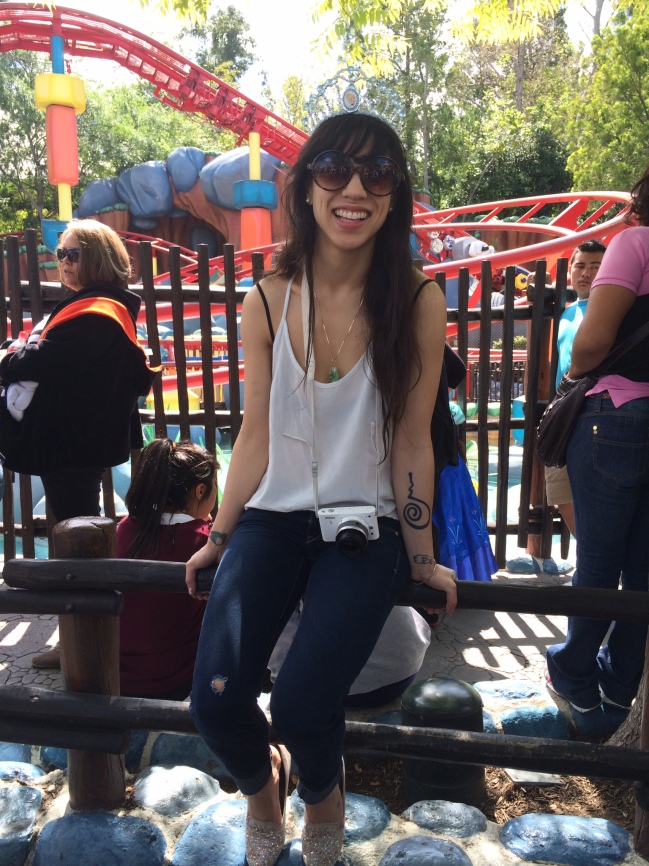 I certainly think that progress towards feminist values has been made with contemporary Disney princesses Tiana (The Princess and the Frog 2009), Rapunzel (Tangled 2010), and Merida (Brave 2012). And although I haven’t yet gotten the chance to watch Frozen, I’ve been assured that the feminist undertones are very refreshing. Disney certainly has a long way to go, but so does all of Hollywood, and as such a hugely influential force in movies and television, I don’t think it is trivial that even small progress has been made towards equal representations. Nor do I think I am any less of a feminist because I absolutely loved being hailed as “Princess” by every Disney park employee for two days. I’m gonna have my cake with a shiny tiara on top, and eat it too.

2 thoughts on “On Feminism and Tiaras: Musings on my Disneyland Experiences”