News broke across the feminist blogosphere last week, and later the mainstream media, of a flier discovered in a men’s bathroom at Miami University titled, “Top Ten Ways To Get Away With Rape.” There is no explanation for how the “top ten” was selected, though we can be sure that, as with most rape jokes, these tips were created with a great amount of misogyny in mind and plenty of encouragement from the ever-popular “boys will be boys” attitude of white America. While the media has addressed the university’s half-assed response, how unfunny rape jokes are, and details about the tips themselves, this disgusting attempt at humor brought one central question to my mind: Where is the outrage from men?

Many women who have attended college know these “jokes” are threatening because of the sheer number of sexual assaults that take place each year across university campuses. In fact, these statistics are magnified at Miami University where, according to their security’s website, 27 reported cases of sexual assault have occurred since 2009, and 19 of those took place in dorms just like the one where the poster was printed. There has been outrage and action from women in response to sexual assault rates for as long as my feminist-studies-trained mind can remember. But there has typically been little to no response from men, the people these “tips” are addressed to.

”Rape culture,” or the social mores that perpetuate and excuse the persistent existence of rape, tells women how not to get raped. Women are taught that it is their responsibility to ensure they aren’t sexually assaulted, by doing things like never walking alone at night and carrying pepper spray. Feminists rightfully call bullshit on these recommendations; women should not be taught to be on constant guard for potential sexual assaults, rather, rapists need to be taught not to rape. Rape culture also tells men and boys that their natural state is that of a rapist. Rape culture, while telling women how to avoid getting sexually assaulted, by not wearing short skirts, always walking in groups, drinking less, and carrying weapons, simultaneously tells men they need women to act in these ways so they can resist raping them. These narratives basically suggest that all men walk around with a beast-like desire to violently degrade and abuse others. Does that sound like you, male-identified readers? 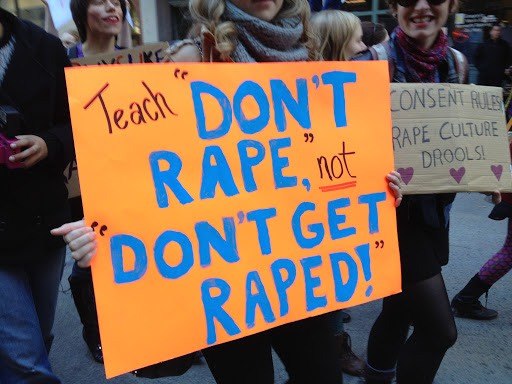 Much has been said of the misogyny, violence, poor grammar, and overall disgusting notions the flier demonstrates, but the final and concluding tip of the ten suggestions is the only one you need to read to see my point in action. It reads, “RAPE, RAPE, RAPE, its college boys live it up!” If you’re a man “living it up” in college, according to the author of the flier and many people who adhere to rape culture myths, that means raping as many women as you can. While I could write on and on about what this incident brings up for me, I want to open this topic up to you, the readers:

How should universities address and respond to these sorts of threats?

How should the student body address and respond to the author of the flier, if identified?

And, male-identified readers, how does rape culture affect you?

Wetlands Magazine is the University of Puget Sound campus publication dedicated to the critical interrogation of gender, sexuality, ability, age, class, race, embodiment, intersectional identities and social justice as well as the celebration of related art, poetry, literature and performance.

One reply on “Miami U’s ‘Rape Tips’ Leave Us Asking: Where is the Outrage From Men?”

To answer the questions in order:

1) Universities should expel these sorts of threats: Often, these things are in violation of university’s sexual harassment policies, and it actively promotes a violent culture which is in no way in furtherance of an academic environment.

2) If identified, the people who posted these fliers should be help publicly accountable, probably denounced in the school’s newspaper, as well as local media. They should be forced to account for the violent frameworks they promote.

3) As a male-identified reader, I am horrified by the heteronormativity and downright assholery of this kind of thing. This active promotion of rape culture forces me into an ontological framework whereby I am told it is necessarily a part of me that I want to rape women (plot twist, I don’t; second plot twist, I’m gay) and which posits this as acceptable or okay. It constructs a violent frame and then tries to force me into it. That’s probably a bad way of thinking about men, women, and everything.